My guiding career began on the Winnipeg River in Minaki north of LOTW in the mid 1970’s. Since that time, I have traveled and fished with many teachers on many waters from Cave Run (PMTT) to Georgian Bay, the Kawartha Lakes, Kingston/Gananoque St Lawrence River section, Lake St. Francis, Lake St. Clair, and more.  Guiding for other species including bass, walleye, pike, lake trout, rainbow trout, brown trout, speckled trout, and gar (former Canadian record holder) has provided a well rounded understanding of fish behavior in general and contributes to targeting the king of freshwater, the muskellunge.

I live and breath muskellunge.  Writing, presentations and education, participating in cutting edge research, designing and producing top quality baits (Musky Factory Baits), producing the best in musky video, and traveling to fishing and outdoor shows is what occupies most of the time when you can’t fish for muskies and I can’t net them for you.

Although I started guiding when I was young I found full-time guiding as my calling later in life.  I earned a commerce degree from the University of Guelph and managed hospitality and restaurant operations for 15 years.  Then a high tech education and five years in that industry (IBM) preceded a year with Ottawa Bluesfest before chasing dreams and making memories.  Add a passion for travel that has taken me around the world and I promise to do my best to hunt, to teach, and to entertain you

To see a list of the 18 television programs I have been a guest on as well as some of the magazine, online, radio articles, and appearances, visit the media tab on this page.

“The stretch of the Ottawa River below the city of Ottawa near Plantagenet, Ontario in the Prescott-Russell Region is an incredible musky fishery.  John Anderson is a wealth of knowledge” – Jim Saric, Musky Hunter TV 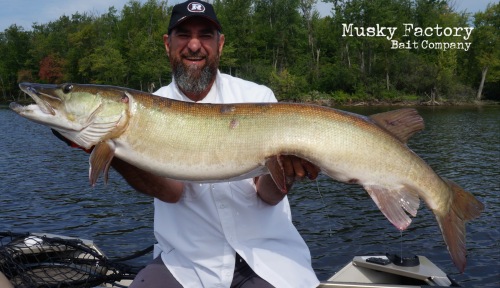 Mike Kadoura combines a love of fishing that started as a child fishing the Great Lakes with a passion for teaching.  He smiles and laughs and jokes all day because he is doing what he loves most (OK, second most after his beautiful family).   He fell in love with the Ottawa River in the early 90’s and has been learning ever since.  He has won ‘Biggest fish of the year’ prize from Muskies Canada Ottawa two times with fish of 54 and 55 inches in consecutive years.  When I comes to hunting Muskies on the Lower Ottawa Mike’s knowledge of technique, lure choice and boat position is remarkable.  Every day on the water with this seasoned guide brings not only a great day of musky hunting but a wealth of musky fishing knowledge… and just a lot of fun! No one brings more enthusiasm to the boat launch in the morning.

“The day went by too fast. We enjoyed our Guide Mike immensely!  Everyone left with a boatload of knowledge and a new friend.”   – Rod H (October, 2020)

Severely addicted to muskies!  That’s a great way to describe Lisa.  Although she caught her first musky only 9 years ago, Lisa will tell you that fish changed her life.  She immediately went out and bought a boat and began spending almost every spare minute on the water.  Her learning curve has had an enormous trajectory and she has been a student of many well-known musky guides.  All this led Lisa to make a major career change and going into her third season Lisa is one of only a handful of full-time female musky guides in Canada.  In fact, I will tell you that she is at the top of the list of female guides in our country.  With fish up to 51.75 inches in 2019 she more than earned her stripes in her first two seasons.  You will be well taken care of in Lisa’s boat and there are a bunch of letters from her customers already attesting to how much they learned and how well they were looked after.  Lisa is a member of  Muskies Canada (www.muskiescanada.ca) and is a long time volunteer with Blue Fish Canada (www.bluefishcanada.ca) teaching sustainable fishing practices and ensuring the future of recreational fishing in Canada.

“First of all, Lisa knows her stuff! She taught my wife how to bait cast very easily when I had tried and failed in the past! She knows the spots and lures and what to do and when it will work. There’s never any guarantees when musky fishing (fish of 10,000 casts) but we got one with her and it was awesome! My first boatside strike and my first fish in the dark! I tried for two years on my own when I first started musky fishing, with no luck.  She is also awesome to hang out with.  She has an amazing personality and time flies with her. We had the best day!” – Marcus M. (September 2020)

“Lisa, We had the best time!  I honestly can’t thank you enough.   You absolutely made our trip and put a huge smile on my son’s face.  Ty can’t stop talking about the fishing trip with you.  It is like the others didn’t happen.  He is already planning his trip with you next year! I really appreciate you getting us in at the last minute and getting those fish hooked.  Wow!!!  You are an amazing guide and angler.” – Stephany R. (July 2019)

“We had a super day! You are a super person and an excellent fishing guide… passionate and know your stuff. Thanks again!”  – Todd N. (September 2019)

Anthony is another natural teacher with a innate ability to hunt muskies.  In fact, he caught the biggest musky on the Ottawa River in 2018 boated by any Muskies Canada member. Anthony is entering his second season as a guide with the ORMF and has collected a wonderful bunch of guest photos and letters of praise already.  His catch rate in 2019 was over 75% and Anthony will take great care of you.