No doubt about it. Peter George is a northern version of the famous Dos Equis man. He could be the most interesting man in Canada. A prominent former university president, a truly connected man, a man who has hunted fish all over the world, the most efficient dater in the world; three dates, two wives, and a man who defies time. He is inspirational.

For those of you who know casting musky lures all day is hard, know that Peter only casts!

Peter showed up in late November almost three years ago to add musky to his long list of catch and release fishing trophies. Mother Nature did not conspire to make it easy and after two tough days the river begrudgingly gave Peter his first musky.

Determined to get even for having his butt kicked by a creature with no feet, Peter returned in July 2013. He got more than even with a bunch of muskies and this most beautiful fish of a lifetime musky.

This year Peter brought his grandsons Tyler and Spencer to share and teach the joy of hunting on water. The three are already passionate about Steelheading on the Gan and the boys were about to get a taste of what chasing the big girls is all about.

It worked out very well for our team as the boys each landed multiple fish and we got another one that was big enough to stretch across all three members of the team for a photo Tyler and Spencer were great students and learned quickly. They worked hard, appreciated the beauty of where we were, and we all shared in the bounty of the river together. 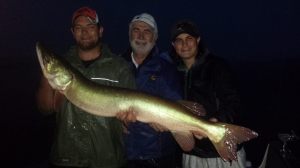