With a title like that it might seem like I am bragging. Ok, I might be, just a little bit. This is our best season ever here at the Ottawa River Musky Factory and it isn’t over yet!

Bryan Osborne has been hanging out in my boat for a three years now. He has seen and watched his friends boat some monster big fish. A few weeks ago he caught this horse. Full details of the day can be viewed on an early November post.

This time he came back for one more day of muskies and he brought Calvin with him. We all spent a day on the river above Arnprior at Sand Bay and Calvin learned tough lessons about managing your lure and catching fish that want in your boat as he ‘watched’ several muskies at the side of the boat but didn’t manage to boat one on his first musky day.

Bryan is fun to fish with for many reasons. He is a down to earth working man who has the musky bug bad and has turned a steep learning curve into lots of big fish and big fish stories very quickly. Today’s lesson was bulldawgs work in cold water.

When Bryan groaned I turned to see a mass of bubbles about 20 feet off the side of the boat. Asking Bryan what happened he replied ‘I think I hooked a tree’. Honestly that’s what it looked like except there were no trees in the water where we were fishing. A cast back produced a follower and he ate just off the side of the boat. The lack of girth on the fish for November is an instant sign that it is a male.

Calvin was now working harder than ever and was determined to get his first musky as time wound down on his last chance for the season. After having exceptional fights with the bottom twice already during the day, Calvin’s third call of fish on was real. Two cranks after the dawg hit the water he was in. Another male and a beautiful first musky.

It was a privilege to be there for Calvin’s first fish. To see how much he wanted it and to see him come back in the cold at the end of November and get it was a great reward for all of us. Thanks Bryan. Thanks Calvin. That should hold you until next spring.

Watch the Fish Finders on WFN television on Wednesday November 26th at 7:30 (and three more times over the next week) for a small river November musky show we just shot a few weeks ago. 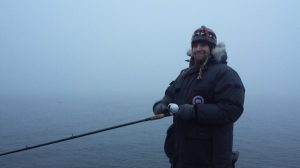