Last year the Vinet family came out for their first ever musky outing on the Ottawa River. Papa Germain stole the show and caught the trophy for the family photo and claimed the crown as imperial ruler of the world, or at least king of the cottage refrigerator photos. To put in perspective just how big the refrigerator family fish photo title is; there are nine of Germain’s siblings who visit the cottage with their families annually.

This year Germain was in a giving mood and really wanted to see either his son Simon or Eric holding the head of a new family trophy in a fish big enough to stretch across three people. A year to the day we set sail for this adventure and two years in a row the opening week of the season was a good one for the Vinet’s.

The evening session produced four nice muskies. We even went back and caught the fish my previous Philadelphians got to play with a few days earlier. On only his second outing Simon scored not one, but two figure eight muskies at the side of the boat including the beast of the day. To put this accomplishment into perspective, my mostly American clientele want three things when they come here: a 50-inch musky, a figure eight musky, and a topwater musky. All three of these are difficult in the musky world with a 50 being the penultimate achievement. Better still Simon had to work his bait for 20 to 30 seconds to get a strike from a fish that he had lost sight of. There is nothing more intense in freshwater fishing world than a giant musky smashing a bait in front of your eyes when you have 10 inches of line out and your drag clamped down.

Brother Eric was smiles from early in the evening as he caught his biggest fish ever as well. Everyone got what they wanted and it is safe to say that Germain, Simon, and Eric will be the imperial rulers of the world for another year yet again, or at least the kings of the refrigerator. 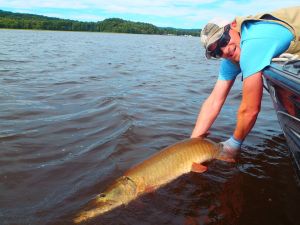 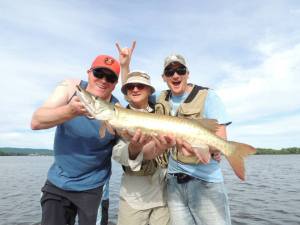 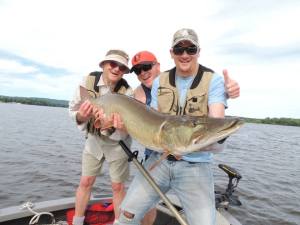 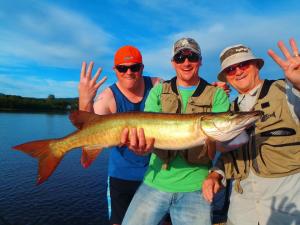 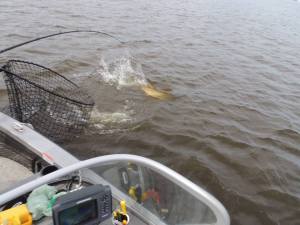 Thanks guys. What a great day.