I had the pleasure of sharing my boat with a couple of fishing celebrities yesterday; Ashley Rae from www.shelovestofish.com and Jason Matity from www.matitysgetfishing.com. Jason is a long time TV man from Saskatchewan who has been putting quality fish on television for years and now has a highly regarded web show that features not just the world record rainbows, monster pike, and Goliath lakers that are coming out of Saskatchewan, but a wide variety of fish from far and wide,

Muskies are becoming a new passion for Jason so Ashley and I were the perfect Ontario hosts since all we did was bring fish to the boat for Jason and take pictures. We fish as a team in my boat and when one person brings a musky in behind a lure the other anglers also figure eight for it. Ashley brought one in and Jason caught it! 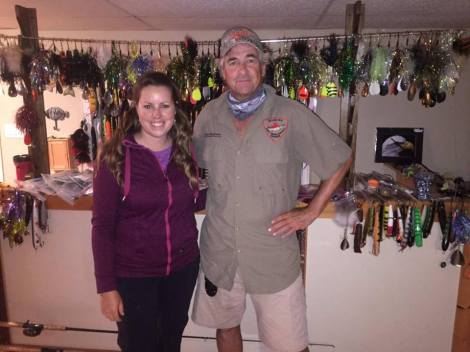 Actually Jason’s first day on the O produced six interested muskies, five hit baits, and three came in the boat. We left a good one in the water for next time too. Thank you Jason and congratulations on putting the 100th musky of the year into my Crestliner Raptor. It is the ultimate musky machine!

A lot of people have told me that it has been tough lately out on the river. This time of year finishing at the side of the boat is EVERYTHING. We have put 20 muskies in the boat in the past eight days on the water and OVER 50% of them have been at the side of the boat. Four of the seven fish The Musky Boys put on film here this past week were at boat side and I will have their videos up shortly so you can see what to do.

I also want to send a shout out to Steve and Taylor, two new musky chasers I met at the dock earlier in the week. Love your enthusiasm guys. Since you guys are green, keen, and from Orleans, I would like to suggest that you attend a Muskies Canada meeting which happens every month at the Legion in Orleans. The most eclectic and dedicated crew of musky hunters and coaches in the region meets to learn and share on the third Tuesday of each month. If you need more information write me or go towww.muskiescanada.ca

New website should be out soon! Your feedback is appreciated.