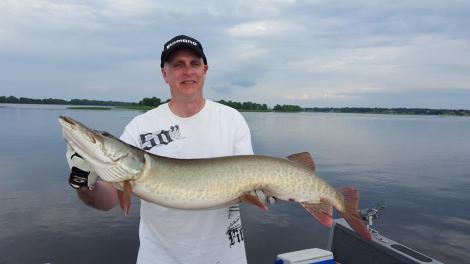 There is no more fun way to catch a musky than on a surface lure and right now is one of the best time of year to accomplish this. Gord Pyzer called surface baits and ‘10 percent lure’; it’s only the right lure 10 percent of the time in musky fishing but when it is it catches more big fish than just about any other bait.

Going back decades the surface baits of youth for many people were the Hula Popper and the Jitterbug. The Jitterbug grew to a giant 4 3/4 inches long and became perhaps the first surface bait for muskies. It wasn’t a water thrower as it is a light bait that skitters from side to side on the surface. It’s an action that looks alive from under the water looking up and it has fooled fish for years. Fast forward to the modern day and this proven bite inducer has been made even more attractive to hungry muskies.

Big Mama makes a bait called ‘Obnoxious B’ that combines the best of the traditional ‘plopper’ tail style surface baits with the erratic hunting action of a bait with a big water pushing lip on the front. And the water throwing lip on the front is something that muskies haven’t seen before. It literally throws a sheet of water from side to side and makes it look even bigger from beneath than it actually is. All that moving water makes it difficult for a musky to get a really good look at the bait as well which makes them more likes to strike as all they have to go on is it moves like it’s alive! 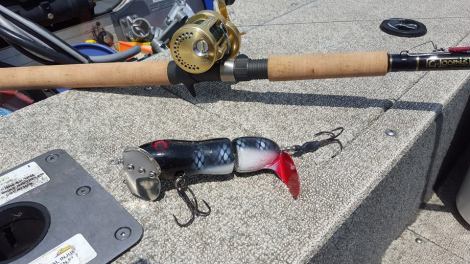 I have liked Obnoxious B since on the fifth cast I threw with a prototype last year I had a log size fish swim it all the way back to the boat from 50 feet away. A few weeks ago one of my guests broke out another first edition musky surface bait and asked me what I thought. It was called a Jitter-Walker by Fish Whistle Lures. When he put it in my hand it was obvious from the weight of it that it was going to sink like a stone. This made no sense so we shelved the bait until a little later in the day when a lull in the action had us scratching our chins and pondering different techniques. On went the JW and in only a couple of casts we were breaking out the cameras. This bait with its’ unparalleled mass and density can push and throw more water than just about any surface bait I have ever seen. We caught a second fish on this lure on a subsequent trip and this lure has my full attention now because being different than all the other baits that a musky sees over the summer and has seen a thousand times before can make all the difference between fishing and catching.

Now go and make the surface explode on your water.