Henry and his brother Rich from NJ caught the bug for the Ottawa River on their first trip. We had 25 big fish up on baits at the side of the boat and Henry couldn’t turn even one. Worse than that, his brother Rich got a big one. Last night, on the very last cast of the evening, Henry got more than even.

This picture can explain why we would end the night after catching this horse on the last cast. Notice Henry is not smiling. Check out the blood running down Henry’s thumb and the band-aid wrapped around his middle finger. That’s because in trying to get a hold of his fish Henry let the big girl clamp down on his hand. She wouldn’t let go for any reason and Henry had to suck it big time just to get these pics. We took the shots and then went for medical attention. The important thing here is that Henry now has a bigger musky than his little brother Rich. 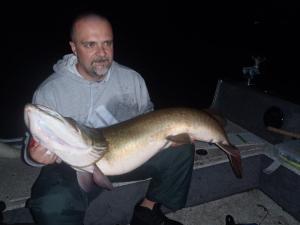