The weather broke and allowed us one last chance to catch a musky this past week. My guests were booked in for Sunday and let me talk them into changing it to Friday as the sub zero temperatures and 60 km winds on Sunday would be a no go. Good call.

Colin and Nick are new to musky fishing but have already decided that they are casters. We got lucky in the first hour of the day on a Medusa and Nick put some green in the boat. Two more strikes lead to obviously big fish being hooked up but not sticking. After Nick had 20 feet of line ripped off his clamped down drag and his St. Croix pretzelled underneath the boat there was nothing left to say except ‘that was the biggest fish I have ever had on my line in my life’. I love it when my guests mumble stuff like this for hours and hours……

The mumbling ceased later on and was replaced by a smile as Nick got to pose with the last musky of the year in 2013. A gorgeous healthy little fatty which is why we crazy musky guys still go out on the water at the end of November. Kudos to you Nick. 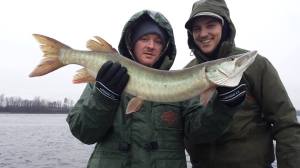