When last we spoke the Ottawa River was becoming unfishable. We had 3 fish up to 49 inches in the boat in the first six hours and life was good. Let’s check in 30 hours later…..

Alan and Bill from www.TheFishFinders.tv were scheduled to fish on their own on Thursday the 26th. It was one of the strongest lunar peak days Of THE YEAR for muskies. What could go wrong…… Oh ya. WEATHER ALWAYS TRUMPS THE MOON and this day was a weather grand slam. Just to make the boys feel more confident, when they called in the morning to seek advice I told them I offered my charter a chance to rebook later in the year because fishing in chocolate mild doesn’t usually produce well. Oh ya, I was headed in to see Earth, Wind, and Fire at the Ottawa Jazz Festival. Proved to be a great decision as the boys worked all day with no signs of life in the river. Ughhhhhh.

Move to Friday the 27th. This is the last chance and the water still looks abismal. The quest for clear water did not go well for most the day and the muskies were still asleep. We really needed one more fish and the team was tiring of casting by the hour. A few contacts and a heartbreaker fish the gave me my glide bait back after and out of water headshake just to show me how big she was. Heading into the best peak of the day at sunset we weren’t feeling lucky anymore. It was going on 30 hours since Alan and Bill last saw clear water and boated a fish.

When things are tough go to your best spots, throw your best lure, fish slower in impaired conditions, work hard, and just maybe…….. Alan Gibbons will save the day again!!!!

Now we can all go and sleep for 12 hours. What a trip and what a show we made. Four fish on film in 3 brutal days up to 49 inches and the musky of a lifetime for Alan. Congratulations my friend.

All fish were caught on the same PDeez bait too. Funny thing is Paul Didaskalou rebuilt the bait at 2 pm on film that day and I had to cut it up for the release again that evening. This is a good problem to have. The Shimano 400D reel which is made for burning inlines sealed the deal. 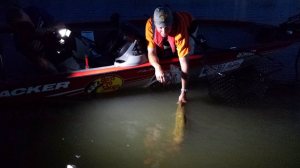