If you have been following along this year you know how hard we had work to put muskies into the boat on the Ottawa this past week. We got our fish almost every day but a musky hunters PMA (Positive Musky Attitude) can take a beating when you throw all day for only a couple of contacts. I watched seasoned musky anglers visiting from all over start to sleep in instead of hunt because hope didn’t live on the river for them.

Danny S from Ohio and my friend Jay M from here in Ottawa went out yesterday and I was grateful to have two really good casters in the boat. The better you cast and control your lure at boat side the more fish you catch. It is that simple over time and I watch many newbies have their hearts broken because they just can’t relax and let the fish into the boat when she wants in. That chance last for two seconds sometimes and you do it right or you don’t.

Danny is just recovering from a shoulder injury suffered on last weekends trip. Tough dude as he didn’t complain once. We just kept putting more bandages and tape on him as we went through the day. Good thing we had supplies because Danny was about to have his greatest day of musky fishing ever. Last season he boated a total of four. Today, on his first day on any musky water he equalled last season total. Not only that but Danny got his biggest fish ever on a figure eight only half an hour into the day. What a shoulder tester too!

Jay chipped in with one because he always does and to be a polite Canadian host he made sure he only got the second biggest fish of the day. After three years of fishing with Jay and Danny I can say that we have never had a zero day and this is our second 5 spot. Ten percent of the anglers on the water catch 90% of the fish. It’s not an accident.

The magic bait I am pleased to say was the brand new ‘Johnny A’ from PDeez Inlines. Designed it myself and you can find it on the PDeez website or Facebook page. Four fish on it today!

Out again in an hour to try to make a memory of a lifetime for someone else. That’s how special the Ottawa River is. Come get yours. 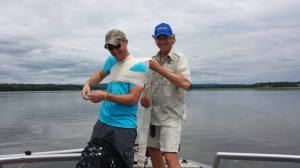