Ken already had the fish of the week and the fish of his lifetime. He caught it in front of his grandchildren and his son. It was already the trip of dreams. How could it get better…..

This fish hate an LSG Missile from PDeez. Lighter, faster, and easier to bring in, it is proving to be a whopper stopper.

The moon peaks are massive this weak. You can count on action every day if you are following them. This was the day before the ‘super moon’. It has lived up to and surpassed the moniker. It has been a crazy big fish week in a crazy big fish month.

Btw, Ken had the fight of his life with this big girl as he danced with her and played the lead at the side of the boat for almost 3 full minutes. You don’t have to rush your fish into the net because that is a good way to lose the fish of your life and have nightmares for decades. Just keep the rod bent and lead her on. Ken was a dance master this day.

Now it is complete….. the only way it could possibly get better in our boat is if young Lawson got his first 50 on the same day as Pappa Kenny. You can only write this stuff on the Ottawa River chasing muskies. Live the dream. It is right there in front of you for the taking. 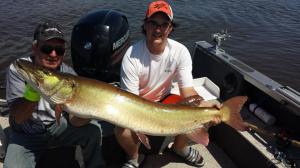 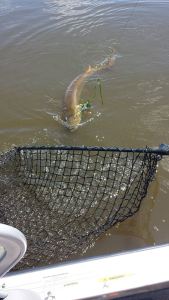