I could have told this story a few days ago but it simply would have been lost in the glory that was the Handley Monster caught by Lawson’s grandfather Ken. It is yet another crazy musky happening that goes on every time you take the Handleys out on the water.

Lawson calls ‘fish’ quieter than any person I know. I was looking the other way when I heard this whisper from the front of the boat… ‘fish’. As I turn my head from watching Kenny’s LSG come in I see Lawson with his fish rod straight up in the air. There is a mess of wrapped line at the end of it and I can see the birds nest in the reel already. The line is slack as well. None of this looks good on my first one second assessment of what is going on.

Then Lawson turns and throws the rod at me. I am not familiar with this technique myself but he definitely has my attention. Before I can catch his Shimano Compre and go for the net Lawson grabs the 80 lb PowerPro (the line)and starts hauling this fish to the boat. I have no idea what it is and apparently it was also unprepared for this sort of fight and the fish and I arrived beside Lawson at the same time. One quick scoop and in ten seconds Lawson had hand bombed the biggest musky every hand bombed in my boat. Wow.

What a fish and what a story for the unbelievable Handley photo gallery from the Ottawa River. Thanks guys. Can’t wait until October guys!!!

Oh yeah, there was a bonus silver lamprey…… 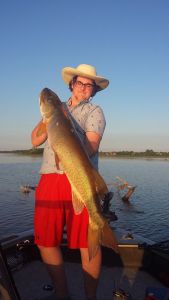