Chris Jonsson is one of the classiest athlete’s I ever had the pleasure of competing against and with. He is a local basketball legend and took his talent from Bell High School to NCAA Div One and Simon Fraser University. When Ken Stunell, my musky mentor from Sunset Point in Minaki (www.sunsetpointminaki.com) to put a charter up for auction at the fundraiser and appreciation night for Chris this past winter, it was a no brainer.

The basketball and sports community in Ottawa came out in droves and old faces that hadn’t been seen in years were reunited. That night Mark Patterson bought our musky charter for he and his boy Lane. In my humble opinion, he got the deal of the night. Here’s why….

Mark and 17-year old Lane had never fished for muskies before and had never used bait casting reels. The first half hour the two looked pretty awkward with their Shimano reels and rods. Curado’s and Compre’s are perfect for newcomers and veterans alike in the musky world and it didn’t take long until the two looked like a team.

Despite the lack of interest from the muskies in the first half of the day both Mark and Lane diligently learned and practiced how to finish at the side of the boat. This is the key to turning boat side follows into picture fish and boy did these two go to school.

The river saw fit to give us a small fish early in the afternoon we were all grateful. Blue skies and a crazy high barometer are not stimulating to muskies in the least and we were hoping for just a couple of shots at sunset.

From zero to one hundred in 45 minutes! That’s how long it took to land three giant muskies for the two. Two of the fish were caught on the figure eight too! What a finish, what day, what a treat to be a part of.

Lane and Mark were great boat partners and this trip of a lifetime will live on in pictures and memories forever. 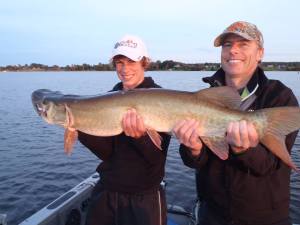 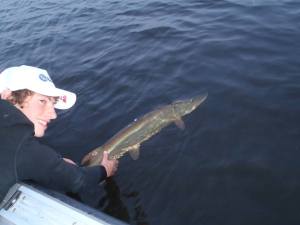