As you have seen, spring and summer ROCK for musky fishing on the Ottawa. You certainly don’t have to wait until fall to catch your trophy musky. Shorts give way long pants, the night skies get even more beautiful, and the muskies start putting on their winter feedbags.

There is nothing in fishing anywhere that is as exciting, surprising, and shocking as the boatside lure massacre of a giant fish destroying your bait right at your feet. While I am giggling like a little kid most of the time I often have to remind guests to smile afterwards for the photo. ‘Pretend you are happy’ is my standard come back to reality line. This first fish pic of what on this first photo looks like Frank, Birket, and Charles are pretty disappointed with their fish. I can assure you they were not. It only took a little prod to get some smiles going. This fish was caught without a cast as well. We had one guest just figure eighting and after about three minutes of deep circles with a 9 1/2 foot Shimano Compre there was a bump and then a smash and then craziness in the dark.

The second photo is Birket with a very long musky that he didn’t need to be told to smile for. It was the fish he has been hunting for with me for many years. Congrats B, you deserve it!

Harry Kidd from PA is a role model for me. This 70 something dude is very hard to keep up with. We fished all morning and all evening and on the afternoon break arbourist Harry and buddy Myles climbed, trimmed, and fell trees on my property up to 1210 feet tall. Seeing a senior climb 60 feet up a tree wearing spikes with a chainsaw hanging off his belt is one of the coolest and most inspiring things I saw all this year. Thank God they were only here three days because I can’t keep up. Afternoon naps are a way of life for this musky hunter.

Mary Aube received a charter as a gift from his wife so he could catch the biggest musky of his life. He caught the two biggest muskies of his life and came close to catching the four biggest. Disappointed at losing two giants? Heck no, it was the best present he ever received. Hey, it’s Christmas! Maybe you know someone who would like to find the fish of a lifetime under their tree………

Buddy Gord Moore releases another lllloooooooonnnnnnnnggggg musky. Anyone notice how many night shots have been posted here lately? I live to fish the evening and the darkness because it is the most productive time of the day by far. Make sure your guide is willing to go out when the big girls play as that will more than double your odds. Over the past 15 years my guests and I have boated more than twice as many muskies in the evening sessions as we do in the morning sessions. I am not a morning person. Maybe that’s why I chase muskies for a living…..

Sometime the guide gets a big one too. Thanks Shimano. Thanks Loomis. I love having your support.

NJ regular Rob (NOT Bobbie) Gabriele has been coming here for years. Every single trip save one he has taken a trophy. This year was no exception. Rob will tell you that despite catching a bunch of bigger fish with me that this one was the strongest musky he has ever had on his line. Like most experienced musky guys Rob fishes with his drag clamped down to ensure he plants the hooks. When a monster with attitude eats your bait at your feet all heck breaks loose. This fished crushed Rob and took him head first into the Minn Kota on the bow of my Crestliner. If it wasn’t for the electric Rob would have gone over the front of the boat with his fish.

Papa Gabriele demonstrates that guys from NJ are indeed tough as he shows that just because your hand gets eaten by a big fish doesn’t mean you should stop fishing.

The Papillions from Quebec City came to the Musky Factory to catch their first muskies ever. In tough conditions they scored a couple of beauties. Maybe it is because they had their good luck charm with them….. a pocket full of bacon.

Like the size of our muskies so far? Keep stay tuned cuz they just get bigger going into the fall.

Johnny A over and out 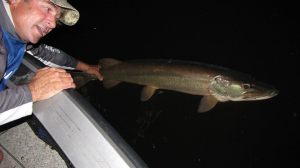 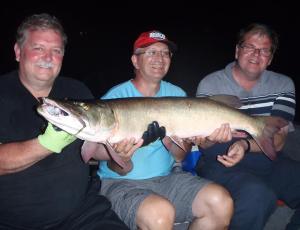 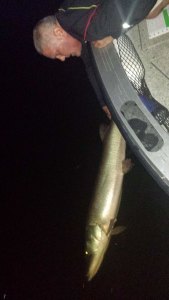