By now you have probably deduced that Wally Robins has a serious musky addiction. Wally and I spent 11 hours hours casting in brutal wind and cold with the river showing no signs that anything alive was swimming in it. While Wally was colourfully expressing his displeasure at our results and his unhappiness with muskies, the fattest fish of the year crushed his bait at the side of the boat.

Jacky P brought a couple of fellow bankers out on a gorgeous November day in hopes of catching their first Ottawa River muskies. By the end of the day all three money managers had ‪#‎muskies‬.

Bryan Osborne caught such a big musky a few weeks earlier when we were out that he had to have one more go before the ice sealed off the boat launch. Kalvin Bell was Bryans partner for the day and he needed a musky. On his first day of ‪#‎musky‬ fishing earlier in the summer Kalvin learned the hard way that turning muskies at the side of the boat is not easy and when newbies cast big baits and work them hard for an entire day with no pictures to show, musky fishing seems pretty unfair. Bryan got yet another and Kalvin’s faith in muskies was also redeemed. Even the guide got in on the action.

Since you will be with your family tomorrow night Dec 24, set your PVR for 7:30 Eastern Standard Time to Record the Fish Finders on WFN (the World Fishing Network). It is a musky show we shot earlier this fall and showcases seven nice fish caught over two days. The show will air three more times this week just in case you miss it. 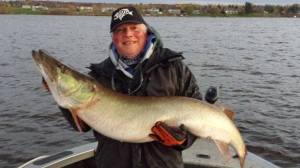 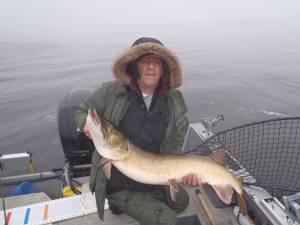 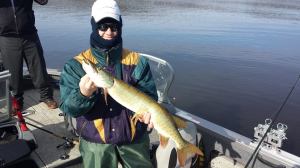