Arrived back from Kona last weekend and started settling into the Musky Factory for the 2015 season. Water levels are August normal right now and the Riverkeeper’s view of the year is that water levels will be very low on the Lower Ottawa. The upper river does not have enough water in it to generate the necessary electricity for air conditioner season and they will be holding back water for most of the spring. Low water means more muskies for those who make the necessary strategic adjustments.

Also, it is an El Nino year. I believe we discussed the effects of El Nino years on our muskie counts in Muskies Canada a bunch of years back and they have traditionally been strong years. So your PMA (positive musky attitude) should be on high this year and you should expect good results. Nothing left to do but reel in muskies!

Shore fishing in Hawaii was fun. My nephew Ben caught lots of coloured fish with big teeth. The ocean is filled with easy to catch mystery fish. Biking the lava flats was one of the coolest places I will ever peddle. And I only landed on my head once!

After 12 hours of flying and an 8-hour layover I was back in Ottawa and on my way to Constance Bay to fish with cool people Doug and Rhonda. They love to be on the water and in an evening and a morning we managed 6 species and going towards 50 fish in the boat. An excellent walleye feast was had and we even got to do battle with a gar. Ten minutes in the fish gave the bait back. It was a sad moment but the first gar the gang had ever seen or tangled with and it did not disappoint.

Special recognition goes to France who went fishing on the O for the first time. Sunday it took her 30 seconds to catch her dinner and Monday she caught almost a dozen pike. Apparently fishing is easy! Who knew.

First charter pics coming next and what may end up being my favourite pic of the year! 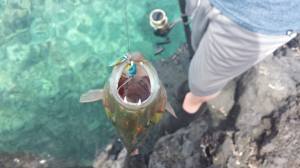 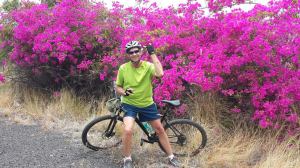