People, relationships, and learning are the cornerstones of life. Muskies are a vehicle to teach you all the lessons you need to know about people, nature, and respect for our world. They take you places you would never go and show you what is truly important. They teach to appreciate the beauty and tranquility that brings peace like nothing else and most often you get to savour this with people who are or become even more special. Muskies make memories that last forever.

This video was shot early last spring in the forest near my house while walking with France and my good friend Roger. Another facet of spending time on or near the Ottawa River is the amazing collection of birds, animals, and reptiles we have living in our area, or just passing through on their way north and south. I have had a pair of moose on my front lawn, deer, and 40+ young turkeys all at once. Almost every day on the water I see Bald Eagles, Golden Eagles, Ospreys, Falcons, and in the fall the noise from the massive flocks of migrating geese and ducks is too loud to talk over at sunset. I am very grateful to live in such a special place as Prescott-Russell.

The bird in the video is a baby Great Horned Owl chick. When the baby (or two) outgrow their nest and fall to the ground it is their most vulnerable time. They stay quiet and use their camouflage to blend in against a tree or bush and hope that no foxes or coyotes or other raptors who fight with the owls, spots them as they have no defense against anything really. The mother stays in the tree tops nearby being very careful not to draw attention to her chick and fighting off the big crows and ravens that continually barrage her. She usually comes down to visit a couple of times a day and with a pigeon for her baby and then cleans up everything afterwards to aid in keeping her baby a secret. I have been fortunate over the years to come across many owls in our area while hiking, boating, ice fishing, or driving. This is the first Great Horned Owl chick I have ever seen in person. 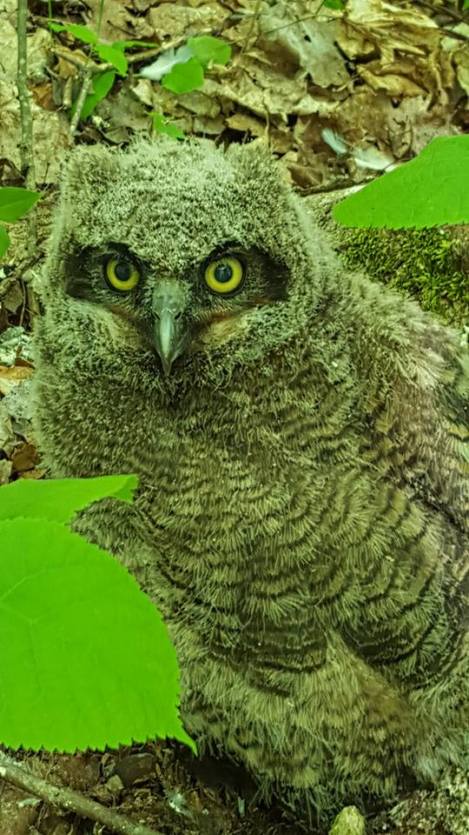 The second picture was taken on the O after Alex, Christian Zimmer’s fine lady caught a musky last fall when we were out together. It is rare but this fish had a hook stuck in one of the few prominent veins located in the mouth and was bleeding when it came into our net. Usually a can of coke poured over the fish’s wound swells the blood vessels and stops the bleeding. Fish do not have a lot of blood in their bodies and two cans of coke later our musky was having difficulty and not able to be released.
We followed all the best protocols; coke on the wound, taking the fish to heavy weed cover close by where there is the most oxygen available to it, and then holding the fish under the water and weeds where the water temperature is cooler and better for recuperation. After 20 minutes our young musky was still having difficulty.

The most important part of musky fishing is releasing our fish alive and in good condition, no matter what it takes. Christian knows musky biology extensively and has participated in amazing DNA and telemetry work in several locations with the MNR and through Muskies Canada funded projects. The fish could not be in better hands. We left Christian in the water with the fish for another 40 minutes which is what it took for the fish to fully recover and swim away strong.

What Christian did was show our fish the love and respect it deserves. Every creature deserves this. What happened next was the most rewarding part of that experience.

I received an email the next day from someone in my area I have never met. He told me he was out with his father fishing for another species and saw what had happened and what was going on. Both he and his father were amazed at how much and care went into making sure that single musky survived and swam away strong. It was a lesson they will always remember.

When one is on the water fishing it is easy to miss the example we set and the lessons we teach, especially to the young. Learning a reverence for all living things is one of the most important lessons we can learn and pass on. Taking care of nature is paramount and only people, through science based environmental management practices and education will ensure that species continue to survive and prosper in a world that is changing faster than ever before because of us.

The World Wildlife Federation released its’ bi-annual Living Planet Report where it inventories thousands of species. In 1970 I turned 10 years old and between then and 2012, in half of one average Canadian human lifetime, the population of vertebrate animals – mammals, birds, and fish – has declined by 58%. The largest area of concern relates to species who are in or around fresh water and their decline world-wide was 81%. There was a decrease of 38% in terrestrial mammal populations and 36% of marine populations, mostly fish.

One way you can contribute is to join your local Riverkeeper organization. I am proud to be a Riverwatcher in the Ottawa Riverkeeper program (www.ottawariverkeeper.ca). Another way is to join Muskies Canada (www.muskiescanada.ca) or Muskies Inc. (www.muskiesinc.org). I also take great pride in being a member of the Shimano Field Staff because Shimano gives over $10M a year to support and develop environmental initiatives. No one cares more or does more to monitor, manage, and support and sustain the health of fish populations than people who fish.

Reveling in the beauty of nature is joy at its’ highest level. It is our inherent responsibility to give back.

Lots of new stuff coming. Next a look back, a look ahead to 2017, announcements of new staff and my calendar of upcoming appearances and presentations, and some really big news about a new online project – The Musky Show!!!! Stay tuned.