It was the coldest night of the fall, the coldest day, and we had a barometer climbing higher than Snoop Dog at the Ottawa Bluesfest this summer. As if it was not already tough enough, the wind starts out from the north and it is 4 degrees when we hit the water. Welcome to the ups and downs of fall fishing

The boys casted methodically all day with only a few small and medium sized muskies that bothered to even make a brief appearance at the side of the boat. No one was seriously interested until an hour before sundown. We had a musky actually hit a bait but of course, not stick

With Jay and Danny’s arms, hands, backs, and pretty much everything else aching from two 9 1/2 hour days of casting big baits, the team’s energy and more importantly thier PMA (Positive Musky Attitude) were waning.

If you are lucky enough to have the wind lay down for you at sunset on the Ottawa then the muskies will usually open a window of opportunity for you. Tonight was just such a night and Jay was able to finally coax yet another Ottawa River Musky Factory Disney Fish into giving herself up for the cause. What a great end to a great trip.

Thank you Jay and Danny. See you next spring. 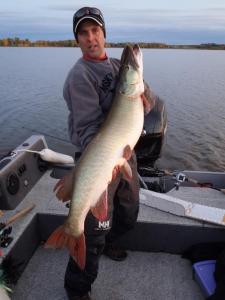 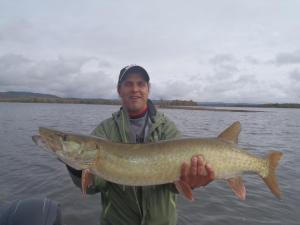 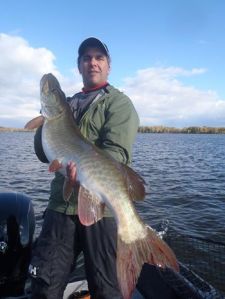 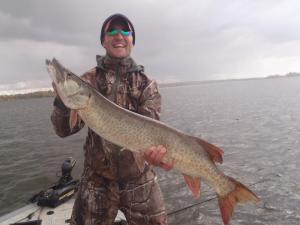