Muskies Canada people are my brothers and sisters. In the 20 some years I have been a member my relationship in the club has been like that of a good family; some hard times and lows that make you appreciate even more all the tremendous highs, happiness, and learning you get from being part of it all. So when one of my brothers calls to book a special trip with me it is far more than a normal charter for me. It is a trip where you have to do well because it matters more.

Al Hamberg wrote me last winter to book a trip he wanted to share a special place and time with part of his personal family. I am honoured he chose the Ottawa River and me. Like most people who see the river for the first time it is not what they expect. Ten seconds off the dock you are in a 100 feet of water. There very little pressure on weekdays and the eagles abound. How can water that is so close to millions of people be so beautiful, so serene, and have so few musky anglers to chase our trophies.

Al wanted his bass chasing son-in-law Robert to experience his first musky because I think he knew what would happen; the same thing that happens to so many of us. An instant life long addiction, obsession, and love would be born. That and Al would have a someone passionate and energetic to drive the car and the boat around on fine musky waters when he starts to take it easier. And it did.

The first fish of our two day trip was a gorgeous 48-incher and it after only a few hours on the water. It was on the right rod too and a moment that will never be forgotten happened as if Al wrote the script. After that moment it was almost as if Al wrote the script as well because over the next one and a half days guess who caught the next eight muskies in a row…. A little benevolence is enough it seems.

Robert’s silly far away look and silly musky smile lasted the remainder of our time together and he had at least a couple of shots at fish bigger than the one he caught already at the boat. Al’s stick on the other hand was on fire and it didn’t even matter what he used. Al boated fish on blades away for the boat, blades at the side of the boat, jerk trolling a Leo lure, casting a jerkbait, and on a top water. Among the eight were a couple of PBs for Al too. Throw in some spectacular Ottawa River sunsets and a trip doesn’t get any better.

These two day new friends were made, we got to share in several never to be forgotten moments, frolic in nature like children, catch several fishes of a lifetime, and just parted feeling like everything in life was as it should be. It is magnificent. 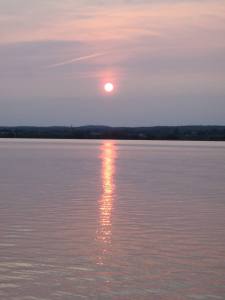 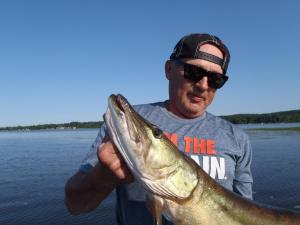 Oh yeah, stay tuned for some more big number day stories and some pictures of some giants.