That’s what my father taught me about betting along time ago. Winning money from friends and people who mean something to you in life has a whole different set of rewards attached to it. So when I lost $5 (USD) to Justin on his first visit up here four years ago it hurt.

Justin was new to musky fishing and told me that he had really bad luck. I told him that in his three days here we should be able to make that happenand he proposed the bet. The now famous (or infamous) Polish Hammers from New Jersey, Rich and Henry caught their fish but we couldn’t pull the pin for the rookie.

A year later on the double or nothing return trip I got my money back and the world was once again as it should be. Justin boated his first musky and there was joy in Jersey.

Justin moved to Georgia that year and when he was trying to make his connecting flight last summer to come to Mecca for the annual musky, kubassa, and vodka fest that is the Polish Hammers trademark, his plane was late and he missed it.

As fate would have it the girls all wanted to dance last go round and the first day of the trip we boated five. So Justin didn’t feel left out Rich suggested I email the pics every time we caught a fish. Very thoughtful that Rich. And as if receiving five musky pics the first day wasn’t bad enough, Henry and Rich had a day that will go down in musky history on the next full day out on the water. Three fish of a lifetime.

Well this year Justin is back with a vengeance and was in a very giving mood upon his arrival. I took Justin’s ten dollars off the wall where it proudly sits and we shook on the now traditional double or nothing. It took only a couple of hours into the first morning for me to take the cash and for Justin to be very happy to hand it over.

The Italian Stallion has now joined the prestigious ranks of trophy holder and can proudly clink vodka glasses with the boys and no longer have to take the condescending smiles, eyes, and comments from his Polish brothers. At least for the first day a new king is born. Behold Justin.

There’s another day of fishing with the gang and ultimate bragging rights are still on the line. Stay tuned for part two…… 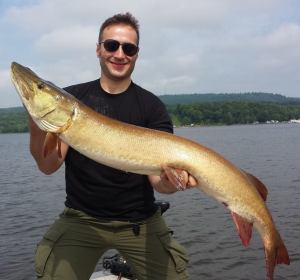 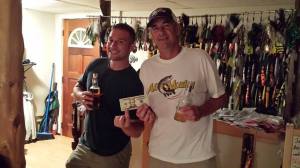 ps Thanks for all the prods for content you keep sending. It has been a heavy fishing period and the stories will come shortly.

Two stories of giants from this past week are in the cue….. Big fish pics abound!